Reflections in the morning light 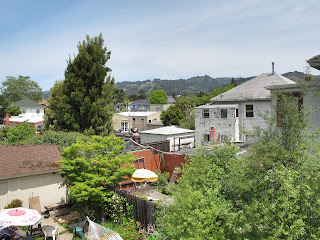 The hot caffeine makes me feel better. More psychological than physical, it reassures me that things are OK and I'm able to do whatever my day will demand. It gives me energy to press forward; when I wake up, I'm awake and may even be brightly so, but almost always lack the extra reserves of energy that anything beyond reading require of me.

Four years of Berkeley mornings have not warped me, but they have given me a glimpse of what tranquility can be: perfect sunshine, a gentle easy light that brings out the greens of leaves and grasses, the browns of wood fences and houses and treetrunks; a clearness to the air, lacking excessive heat or humidity; the fresh, clean, organic smells of plantlife awakening to the morning and disseminating their pollen for bees to find. Sure, there are cars and horns (though not too many of the latter); traffic and chores and strollers and people on phones. And of course it's easy to ignore the gentle pleasantness and focus on the podcast, or the day ahead, or a thousand other distractions. But Berkeley is always here, ready for the morning commuter to open his eyes and nose and perceive it.

It's the light that really makes our kitchen something special - the sunlight as it rises, giving the surprisingly elegant linoleum tiles a character far outstripping their simple black-and-whiteness. The morning gray sky (though not today; perhaps that's a relic of the winter months; I certainly remember many brilliant blue mornings) filling in the gaps between the tops of houses, as different from each other as their collective whole is from the suburban sameness that shamefully dominates so much of this brilliantly beautiful country. The shabbily-pale green of the hills off to the right (East) and the much richer greens and browns and whites of the leaves that block us from the Bay to the West (left).

Sunlight is not all the same. A clear February morning in Chicago, and a clear May morning in Berkeley: both are blue skies with a dominant sun just out of reach, but to look at them is to know instinctively the bitter cold or blissful warmth that awaits outside. How much of this is a trick of context, I'm not sure; I know that clear May mornings in Berkeley are typically not cold and so I see things that are not there, perhaps; indications of a temperature that isn't actually conveyed by anything more than the calendar. I know a clear February morning in Chicago is going to be ass-bitingly cold, and so I see that in the light on rooftops and sidewalks. Yet I feel certain that if I saw a photograph of a sunlit street in February and July, the light alone would help me know which was which.

It's the everyday pleasantness of life in Berkeley that I worry about missing the most, and that I'm not sure Chicago will replace. Of course there are those glorious spring days, coming out of the cold, where the energy and optimism of the imminent summer infects every activity with joy. But the November afternoons - will enough of those be quietly pleasant enough to make up for the lack of the everyday niceness of Berkeley? I suppose I shouldn't worry; plenty of people even in my own family have left here for there and never looked back. They must have experienced this same general pleasantness (the weather is changing, but not by that much in the last 30 years that they wouldn't have had such days as these), so maybe I should just ask them.
Posted by Unknown at 11:03 AM