A night in Chicago 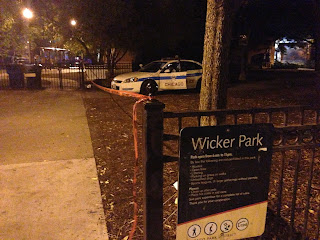 In Wicker Park on this Friday night, lights flashed against the fieldhouse as police cars sat parked in unfamiliar positions, guarding the scene of a double shooting as a house party raged on and pockets of stylish young people walked past, bemused and intrigued. At one point, a Chief Keef song blasted out of the house party's speakers in what seemed like an ironic commentary on the rarity of the shooting that had taken place across the street - unless, as is equally possible, they had no idea anything bad had happened outside the flashing colored lights and sweaty gyrating youth ensconced in their hip, rich enclave.

Shootings happen in Wicker Park, just like they do all over Chicago, but they're different there - much less frequent, more unusual spectacle than depressing daily occurrence. Gangs fight in the park from time to time, but in Wicker Park it seems more like the exception than something common enough to warn your kids about. And the reaction of passers-by to the scene we saw tonight was emblematic of that difference: some gawking, some nervous laughter, some curiosity. But nothing like the tired anger in one woman's voice in Woodlawn, as she loudly railed against the police for just standing around, seeming to do nothing but draw paychecks and shoot the breeze. 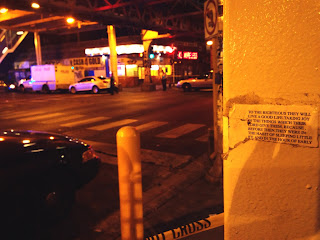 She was angry for a lot of reasons, not least of which being that - unlike in Wicker Park - the shooter this time was a police officer. Justified or not, it's not for me to say, but she saw it as part of a pattern: "They're always shooting black people," she said, or something to that effect. She was mad at the police, for being ineffective, for being violent, for treating her neighborhood differently than they treated rich white neighborhoods.

The cops probably do treat her neighborhood very differently. At another scene on the West Side, a carful of police rolled past us and called out - seemingly to us, the only people in the vicinity and certainly the only white civilians - "Another day with the savages!" They don't say shit like that on the North Side, because they don't think like that about the populations they're policing.

But the cops aren't the only ones who change their attitudes when they cross certain borders. I felt pretty ridiculous wearing a bulletproof vest in Wicker Park, a neighborhood I've hung out in hundreds of times with no armor, but I was glad to have the vest on the West Side. Nothing really happened - a bit of a public brawl, mostly verbal, in front of dozens of heavily-armed officers following a shooting - but the scene felt different and I felt different. The surprised curiosity of Wicker Park had given way, just a short trip down Western, to tension and provocation. Throngs of teenagers yelled and massed and stared each other down and scattered and regrouped, on the periphery of the police presence. For their part, the cops let them be, at one point encouraging them jokingly to take their fight across the street, where it would be in another district and another sergeant's problem. 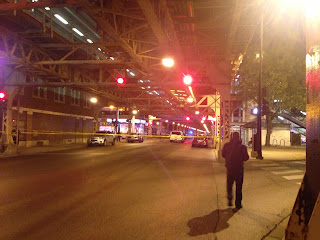 I was spending the night riding along with Pete Nickeas, the Tribune's overnight crime reporter, as he headed from scene to scene, gathering details and color to run down the night's mayhem and tell some personal stories where he could. He's been doing it for long enough to know more than the cops do about their own crime scenes, at least sometimes - pointing out a flat tire on a squad car that nobody, including the officer sitting in the car, had noticed; filling an arriving sergeant in on what had happened and how things were going elsewhere in the district; even waking up the FOP representative after an officer-involved shooting, apparently before anyone else whose actual responsibility that was had gotten around to it.

We saw a side of Chicago that is at once nationally-known and yet largely invisible to many residents of this city, particularly those who don't live in certain neighborhoods or stay up late. To focus on shootings is to miss the point, probably - the statistics tell the tale, crime is down. And yet. "Crime is down," joked the FOP rep once the cameras stopped rolling and all the nighthawks started filling each other in on stories, incidents, tragedies missed over the scanners while photographing another scene. "Crime is down...so they tell me, anyway."
Posted by Unknown at 3:50 AM