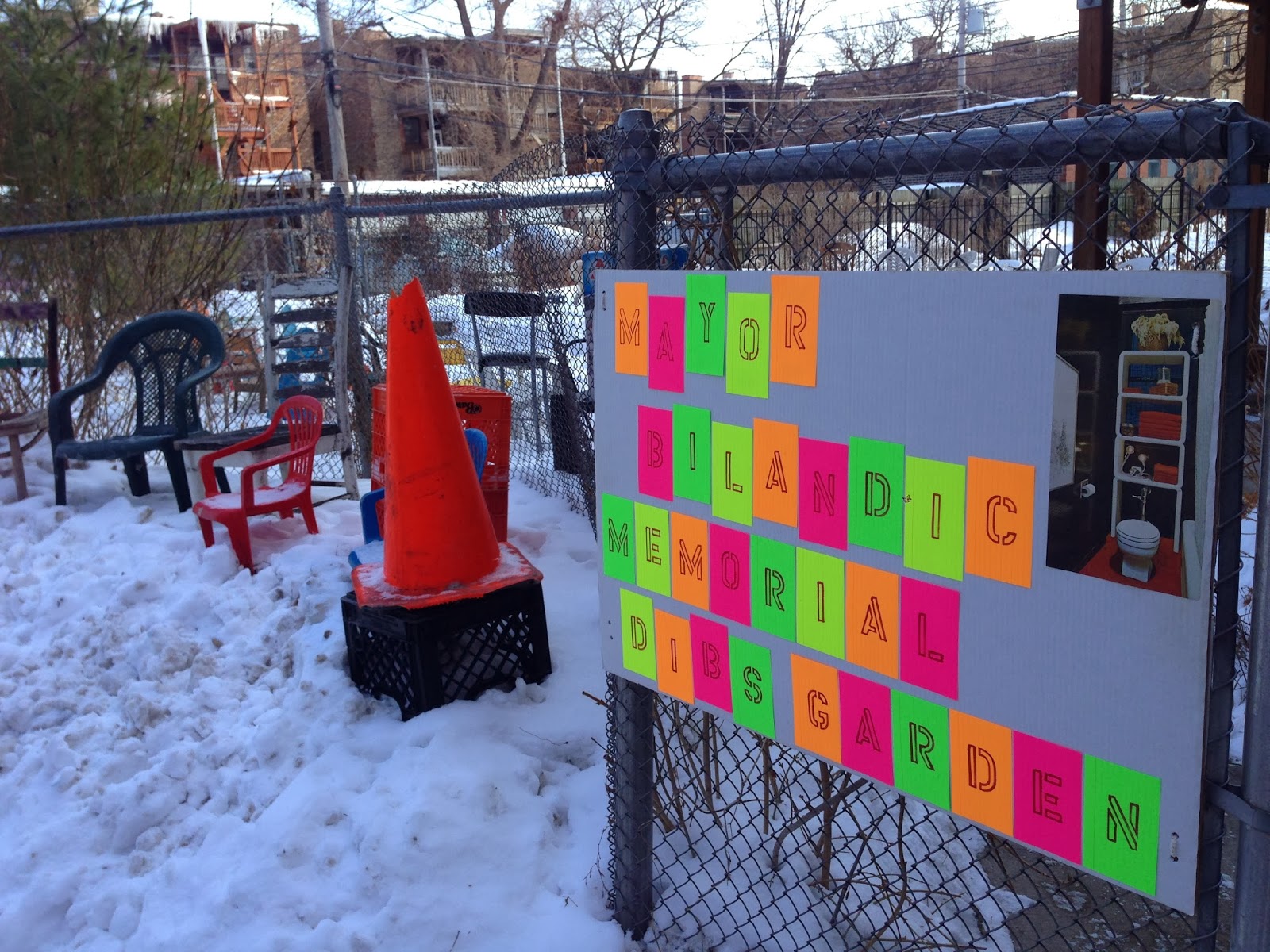 It's the only memorial to Mike Bilandic I've ever seen, a festive celebration of two great Chicago traditions that nobody outside the city really understands, while those inside it only pretend to: Chicago celebrates its political corruption with a zeal normally reserved for the defense of parking spaces, and now some great genius has twinned the two.

In a side alley near 53rd and Woodlawn - those of you who know the city know instinctively where this is, another grand City tradition, marking territory and therefore the teller of a tale by implicit association with intersections - the memory of Chicago's snowed-in hopeless seat-warmer lives on, eternal flame tended by irony and nostalgia in unequal measure.

He let us drown in snow, the elders tell us, reminding us of a day when the provision (or lack thereof) of city services would drive even a Machine Mayor from office. Woe betide the public official who fails to salt the streets, a lesson burned into the memory of anyone who wants to see their name in Chicago's version of flashing lights, on thin cardboard placed just outside the statutorily-mandated 100 feet from a polling place.

The machine gave us Bilandic, just like it gave us Daley before him and Daley after him and on down through the generations, past Cermak and Kelly and Nash and Brennan - dig those first-generation names that adorn our street signs still - all the way back to Ogden. But the machine, back when it was the Machine, gave us Bilandic right out of the fingertips of Chicago's real first Black Mayor, Wilson Frost - now there's a name you don't see on street signs - when it decided that the city charter didn't really mean it when it said that the (black) President Pro Temp of the City Council became Mayor when the Mayor died.

So they locked him out of the office, because of course they did, "can't find the keys," they actually told poor Wilson. One of those conversations in which you imagine everyone knows what's really going on whether or not anybody says it out loud, speaking in a code so transparent it might as well not be a code at all but appearances, even in Chicago, must be kept.

So yeah, Acting Mayor Frost tried to park in that space. It was clear of snow, no obstacles in sight, but the rusted-out chair was merely invisible. Don't you know it, Bilandic had shoveled that space out this morning and it was really his after all. He just forgot to put the chair out, but it was there, don't you worry about that. They should have called him Mayor Dibs; I hope they did.

The snow did him in. That's the legend, anyway; I wasn't around, or born. He didn't get Snow Command out on the roads fast enough, I guess, though I'm not sure what he could have done. January 14th, 1979, left Chicago buried under a still-record 29 inches of snow. This has definitely been a historically brutal winter, but we've only seen 62.9" of snow so far; in 1978-79, they got 80.6", which remains the snowiest winter since records were kept in this city.

The other thing that happened in these early February weeks 35 years ago was, as Mayor Dibs' luck would have it, a mayoral primary, and grumpy Chicagoans expressed their displeasure by voting for Jane Byrne. She ran as a reformer but she was solidly of Machine stock. Byrne was appointed to Daley's cabinet and fired from Bilandic's, and would, as Mayor, replace the head of the most important Machine institution, the Cook County Democratic Party, with a guy nicknamed Fast Eddie who somehow managed to be an even sleazier character than you might expect. At one point, ostensibly to curb the violence in the neighborhood, she moved into the (now largely demolished) Cabrini-Green projects, planning to stay for "as long as it takes," according to her press secretary. She stayed for three weeks.