Everything looks different from the outside

A depressed person can be depressed for reasons that don't make any sense to outside observers. A society can decide that stonewashed jeans and permed hair look really cool, for reasons that fail any rational test of logic. And an economist can look at a set of facts about a place and draw conclusions from them that are simultaneously correct and absurd. 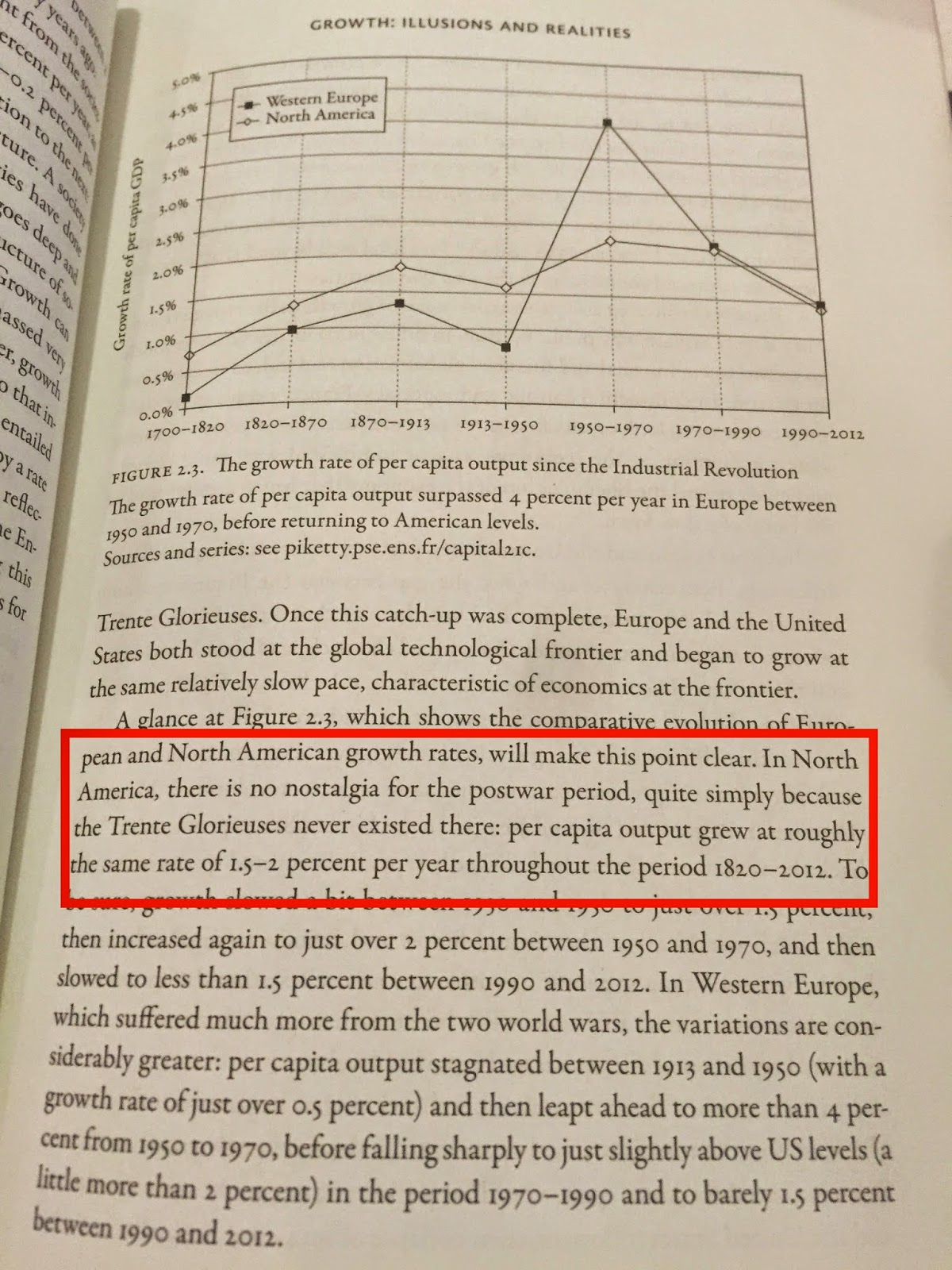 Near the end of his discussion of the history of economic growth since the year 1700, in his so-far-excellent book Capital in the 21st Century, Thomas Piketty makes an observation based on data that made my jaw drop. In North America, apparently, "there is no nostalgia for the [post-World War II] period," because North America never saw levels of growth comparable to the miraculous expansions in postwar Europe, the so-called Trente Glorieuses. The graph at the top of the page illustrates the argument, and indeed, economic growth in North America post-World War II was dramatically lower than in Western Europe.

And yet. Anyone who's lived in the US at some point in the last twenty years and has watched our political debates unfurl would never for a second believe that we have "no nostalgia" for the most overly-hagiographized decades of the 20th century. The 1950s are an iconically great time in America's self-image, at least for straight white men, and an entire political party exists in order to return us to that era.

Piketty goes on to hedge this statement slightly, treating the malaise of the 1970s and the conservative renaissance in the 1980s as evidence that any expansion in the decades prior didn't go far enough towards increasing overall prosperity. But he doesn't back away from the central premise of that paragraph, and it's instructive to think about the broader significance of his...I don't want to call it an error, exactly, since I'm not interested in throwing down an econ debate against one of the most impressive economists writing in the 21st century. So let's say that it's interesting to discuss his mischaracterization of our national lack of nostalgia.

To begin with, it obviously demonstrates the limitations of statistical and economic analysis in understanding a society of complex human beings. He's not wrong about the numbers, but he is wrong about our collective societal memory of that era, and the latter really isn't reducible to any mathematical statement. As human beings existing in the physical world, our horizons are governed by math but our behavior is not predicted by it.

It's also worth thinking about what Piketty's mischaracterization tells us about our own powers of assessment. Americans, myself included, love to make judgements about other societies with relatively little information. A handful of terrorist attacks by a tiny number of individuals cause us to condemn broader aspects of "the Muslim world," whatever that is. We think we know something about Europe because they have strong social-welfare laws and charming old-world accents. Even at home, high crime rates in inner cities lead white people to condemn the societal dysfunctions of Black America.