If you’ve lived or driven in Chicago, you’ve probably spent some time cruising down one of the country’s most beautiful roadways: Lake Shore Drive. If you’ve only done that driving in the last thirty years, however, you were fortunate enough to avoid one of the most notoriously dumb civil-engineering debacles of the American 20th Century: the S-Curve. 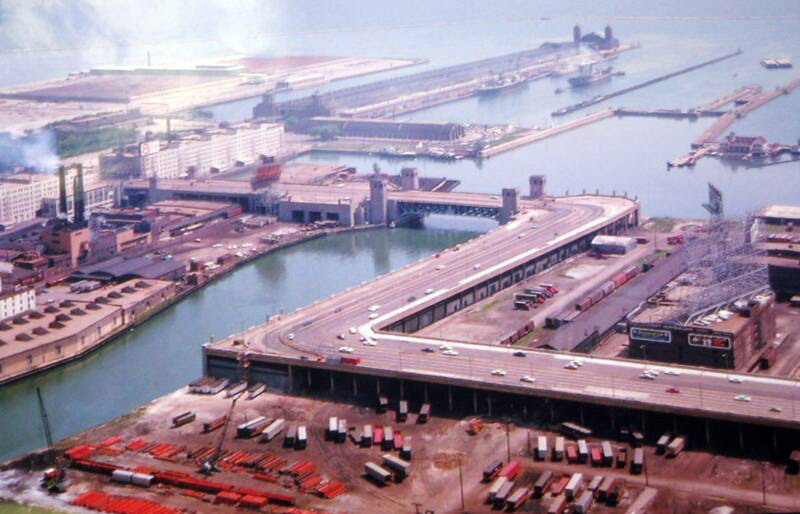 To get a sense of how dumb this structure was, consider the nature of LSD, as we call it: a beautifully scenic lakefront expressway that runs most of the length of the city, often with relatively little traffic. These days, the speed limit is 45 miles per hour (40 during the winter), and the Illinois Department of Transportation estimates that 78-95% of drivers exceed it. It’s pretty hard not to; the Drive feels designed for moving at speed, and the buildings and parks and lakefront whipping by reward it.
So you’re going 50, 60, even 70 miles an hour (as nearly 10% of drivers do in one section) and then all of a sudden, out of nowhere, you hit a curve. But not just any curve. Look up above.
Immediately you have to turn 90 degrees, and then as soon as you’re done not-crashing and not-flying-off-the-side-of-the-highway, you have to do it again. Over a river, next to a lake, immediately before or after a drawbridge (depending on direction), all the while careering through a pair of turns with NASCAR-style raised outside edges.
Amazingly, the good citizens of Chicago almost never crashed their cars on this monstrosity.
Oh wait, they did, all the time. My uncle Jeff remembers crashing at night in the middle of an empty and deserted S-curve and having to walk back to Hyde Park, 8 miles south (some parts of this story might be apocryphal). Other friends and relatives who lived in the city at the time have their own stories of accidents, near-misses and impossibly slow traffic caused by people who didn’t want their own memorable stories to tell.
The S-Curve is gone now, demolished in 1985, but the legend lives on: poor public works planning isn’t an abstraction but an obstacle for the residents of a place to overcome, or suffer under. The lessons of the S-curve are with us in Chicago every time we pay a dumbly-privatized parking meter, drive on the dumbly-privatized Skyway, or attend a basketball game at the unnecessary and outrageously expensive Catholic-school basketball stadium our tax dollars are inexplicably paying for. Public policy matters.